With anti-Muslim rhetoric at its height, savvy and socially responsible brands are promoting inclusion. Here’s what you need to know about Ramadan and how to approach your marketing initiatives in 2018.

Long regarded as one of the five pillars of Islam, the holy month of Ramadan will begin around May 15th of 2018, the ninth month of the Islamic calendar.

The annual observance of Ramadan requires most able-bodied Muslims to refrain from eating, drinking, smoking and sexual activity from dawn to dusk. The spiritual significance of fasting is surrender and submission to the creator.

The Quran, which includes guidance about what is right and wrong, was also revealed during Ramadan, and the prophet Muhammad was said to have fasted throughout this holy month.

It’s a very personal spiritual journey in which individuals are asked to look inward, to their hearts and souls, and cast off physical distractions as they explore their relationship with the creator.

While fasting requires great discipline, Ramadan is considered a joyous time and followers often stay up late to eat and congregate with family and friends.

The season ends with a holiday called Eid al-Fitr, one of two major holidays celebrated by Muslims around the world.

Since people can feel lethargic from fasting throughout the day and sleeping less at night, work productivity may suffer and important business decisions are usually postponed.

Thus, some people wait for Ramadan to take time off from work and, despite the fast, buying behavior increases as people shop for food, clothes, electronics and jewelry in anticipation of Eid .

Jordanian economist Samer Sunnuqrot told BBC News that people tend to consume more and even purchase more than they actually need, adding, “The positive side of Ramadan for business people is a higher demand for goods and services and higher consumption.”

So it’s not surprising that consumer-focused companies typically increase their advertising spend by 20 percent during Ramadan.

Charities also tend to get a boost as mosques collect donations and people are encouraged to donate online. “It is our busiest time of the year,” Safiya Baharune at Islamic Relief in London told the BBC.

The growth of Muslim markets

With more than 1.6 billion Muslims celebrating Ramadan in 33 countries, the season offers exciting opportunities for advertisers.

Muslims made up 24.1 percent of the global population in 2015 and, according to Pew Research, will grow more than twice as fast as the overall world population between that year and 2060 (and will likely surpass Christians as the world’s largest religious group).

Muslims also have the youngest median age of all major religious groups (24 in 2015), a key demographic for marketers. 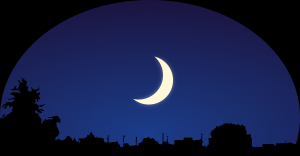 Much like Christmas and Thanksgiving for Western cultures, there are various religious symbols that will help brands incorporate Islamic elements into marketing activities to better position themselves and attract more customers.

The crescent moon is probably the most common symbol used in Ramadan ads and visual marketing today.

It signifies the beginning of each month on the Muslim lunar calendar, including Ramadan and the first day of Shawwāl (Eid al-Fitr), which signifies the completion of the month-long fast.

Dates are commonly found in Ramadan advertising campaigns, part of Islamic tradition since the religion’s origins. 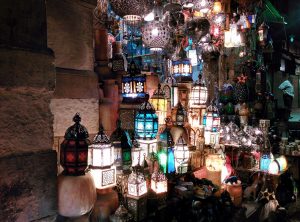 Dates symbolize breaking the fast and are eaten twice daily – in the evening and after a pre-dawn meal (Sehri) with a glass of water.

The late hours observed during Ramadan in Muslim countries are symbolized by lanterns throughout the season, particularly in Egypt where the tradition began.

While not as common as the crescent moon, the lantern is featured in many marketing campaigns and ad formats to convey the spirit of Ramadan.

Fifteen of the top 30 tea-drinking countries are in the Middle East and North Africa, which now accounts for a quarter of global tea consumption

Similar to the English high tea ritual, tea drinking in Arab countries is traditional, nostalgic, and formal (regarded as a refined way to welcome guests). 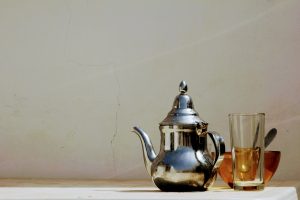 Arabic teapots are frequently used in Ramadan marketing campaigns to represent the gathering of friends and loved ones to drink tea throughout the evening and early morning hours.

The firing of cannons to signify the start and end of the daily fast during Ramadan is an ancient tradition that began hundreds of years ago.

This iconic symbol is reminiscent of a time when clocks and watches were nonexistent, and many brands have found creative ways to incorporate the cannon into their marketing materials and advertisements.

In addition to the use of iconic symbols to appeal to Muslim markets during Ramadan, modern brands can share messages of good tidings such as the popular Ramadan Kareem (Ramadan is generous), and Eid Mubarak or Ramadan Mubarak (Mubarak means blessed).

Of course, cultural sensitivity is of paramount importance as it’s easy to make blunders and get advertising messages wrong.

Who can forget Tesco’s 2015 campaign in which the brand advertised Smoky Bacon Flavored Pringles with the message “Ramadan Mubarak” in an aisle display near the East London Mosque, one of the world’s largest places of worship for Muslims?

Now, more than ever, brands have realized that messages of inclusion appeal to consumers, and are increasingly important to their bottom line.

Stay tuned for part two of our Ramadan 2018 series, which will highlight the best Ramadan campaigns of years past.